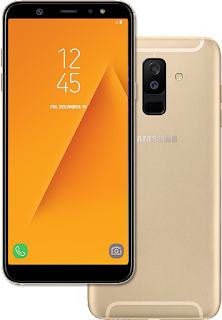 The Samsung Galaxy A6+ has a 6-inch (1080 x 2220 pixels) FHD+ Super AMOLED Infinity 2.5D curved glass display with 18.5:9 aspect ratio. No details about the display protection. This smartphone has dual sim card slot. It can support 4G VoLTE connectivity.

The Galaxy A6+ is powered by 1.8GHz Octa-Core Snapdragon 450 14nm processor with Adreno 506 GPU. It has 4GB RAM and 64GB internal storage, you can expand memory up to 256GB with microSD card via dedicated microSD card slot. This smartphone is running on Android 8.0 (Oreo) out of the box. This smartphone comes Bixby, Samsung Pay mini and Samsung Mall.

The Galaxy A6 has fingerprint sensor on the back and it has also face unlock feature. It has 4G VoLTE, Wi-Fi a/b/g/n (2.4/5GHz), HT40, Bluetooth 4.2 LE and GPS connectivity. It has microUSB port, 3.5mm Audio jack and it can support Dolby Atmos Audio technology. It packs a 3500mAh battery. This smartphone cannot support fast charging.

The Samsung Galaxy A6+ is priced at Rs. 25,990 in India. This smartphone is now available on Amazon.
Smartphones