October 24, 2018
The Samsung Galaxy Tab S4 was Introduced in August. Now it is available in India. Samsung has launched the Galaxy Tab S4 4G LTE version in India. It has a 10.5-inch (2560×1600 pixel) WQXGA Super AMOLED display with 16:10 aspect ratio. Similar to the predecessor and comes with an an enhanced S Pen. The new S Pen lets you take notes on the fly through the Screen-Off Memo feature, as well as navigate, translate and organize notes through Samsung Notes, and even send personalized texts through Samsung Live Message. 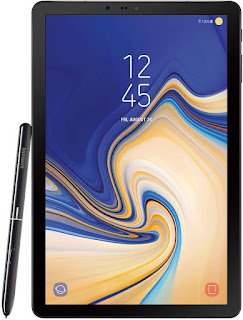 The Galaxy Tab S4 is powered by the Octa-Core Snapdragon 835 Mobile Platform with Adreno 540 GPU. It has 4GB RAM with 256GB internal memory, you can expand memory up to 400GB with microSD card. It runs on Android 8.1 (Oreo) OS. Samsung has brought Samsung DeX to the tablet for the first time. When connected to the Book Cover Keyboard or launched from the Quick Panel, the Galaxy Tab S4 powers on Samsung DeX that lets you switch from the Android interface to a desktop experience. You can also extend Samsung DeX to an external monitor with a compatible HDMI to USB-C multi-port adapter. 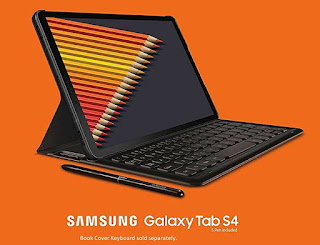 It has a 13MP rear camera with LED flash. The rear camera can record up to 4K videos. It has a 5MP front-facing camera. This tab comes with Iris Scanner. It has 4 speakers tuned by AKG and it can support Dolby Atmos. It has 4G LTE, WiFi 802.11 ac (2.4GHz/5GHz) MIMO, Wi-Fi Direct, Bluetooth 5, GPS, GLONASS connectivity. It has a USB Type-C port and POGO. It packs a 7300mAh battery. You will get Accelerometer, Compass, Gyroscope, RGB, Proximity, Iris Scanner and Hall Sensors.

The Samsung Galaxy Tab S4 is priced at 57,900 in India, it is available on Samsung Online Shop, Amazon as well as offline retail stores in India.

• Up to Rs. 9,660 off on exchange
• Avail No Cost EMI and pay product price in easy
installments
• Rs. 5000 cashback on HDFC Bank Credit Cards,
and EMI on HDFC Bank Debit Cards and
consumer Durable Loans.