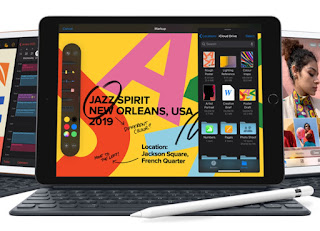 The new iPad is powered by the A10 Fusion chip with 64-bit architecture and M10 motion co-processor. It comes in 32GB/128GB storage variants. It runs on iOS 13. It features a 8MP rear camera with f/2.4 aperture, 5P lens and Hybrid IR filter. It has a 1.2MP front-facing camera with f/2.2 aperture and Retina Flash. It comes with a Touch ID. It has stereo speakers and dual microphone.

It has 4G LTE (optional), Wi‑Fi 802.11 ac (2.4GHz and 5GHz); HT80 with MIMO and Bluetooth 4.2 connectivity. a three-axis gyroscope, an accelerometer, ambient light sensor, and a barometer. There is also a digital compass on board. It is powered by a 32Whr battery rated to deliver up to 10 hours of Web surfing time on Wi-Fi, and 9 hours on a cellular network.


Price and Availability in India