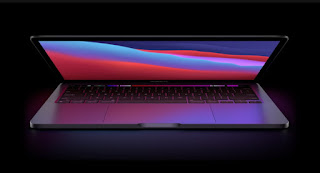 All new MacBook Pro 13 has been launched at an online event. The new MacBook Pro sports a 13.3-inch Retina display with a resolution of 2560×1600 at 227 pixels per inch, 500 nits brightness, P3 colour gamut and True Tone technology. It comes with the Magic Keyboard with Scissor mechanism and the familiar Touch Bar, it also has got Touch ID.

The new MacBook Pro 13 is powered by the all new Apple M1 chip which has an 8-core CPU with 4 performance cores and 4 efficiency cores, 8-core GPU, and 16-core Neural Engine. Apple says that the 8-core CPU paired with the active cooling system is up to 2.8x faster than the previous generation and the 8-core GPU is up to 5x faster. Further, the ML is now up to 11x faster when compared to the previous generation. It runs on macOS Big Sur and it also features Apple’s latest camera ISP that enables sharper images and more detail in shadows and highlights on video calls. It supports up to 16GB of RAM and up to 2TB of SSD storage.

The New MacBook Pro 13 comes with 2x Thunderbolt ports with USB 4 support and a headphone jack. For the connectivity, there is support for Wi-Fi 6, Bluetooth 5.0 connectivity. The battery life on the MacBook Pro 13 has been improved as well. It now delivers up to 17 hours of wireless web browsing and up to 20 hours of video playback which is twice the battery life of the previous generation.

The MacBook Pro 13-inch 256GB SSD variant is priced at Rs. 1,22,900 while the 512GB SSD variant is priced at Rs. 1,42,900 in India. However users have the option to customise the RAM and storage options on Apple India online store. It is already available to order from Apple online store and will be available from Apple Authorised Resellers offline and online retailers in India soon.