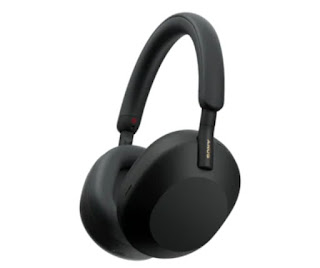 The company said that The headphones features a carbon fibre composite material and high rigidity dome to improve sound clarity, it also has lead-free solder containing gold for conductivity. The Sony headphones comes with Bluetooth 5.2 connectivity, it supports support for Google Assistant, Amazon Alexa, and Apple's Siri. They feature a Quick Attention mode, and touch panel to control music. It also has Google's Fast Pair and Swift Pair feature for Windows 11/Windows 10-powered machines. They can also be used in wired mode. The headphones can be paired with Sony 360 Spatial Sound Personalizer app for optimised output.

The headphones also have Integrated Processor V1 along with HD Noise Cancelling Processor QN1 to control a total of eight microphones. Sony WH-1000XM5 headphones use Edge-AI with DSEE Extreme to upscale compressed digital music files in real time. It also comes with Auto NC Optimizer feature. The new sony The headphones have a stepless slider, swivel and hanger, and silent joints.

The Sony WH-1000XM5 comes with Speak-to-Chat feature that automatically stops music and lets in ambient sound as soon as the wearer starts a conversation. The headphones have capacitive sensor on the Sony WH-1000XM5 headphones that pauses and plays music when you remove or wear them. Furthermore.

The company said that the headphones can deliver up to 30hr of battery life with ANC off, and up to 24hr with ANC on. They can be fully charged in 3.5hr, as per Sony. The headphones are said to deliver 3hr of run time after 3 minutes of fast charging.